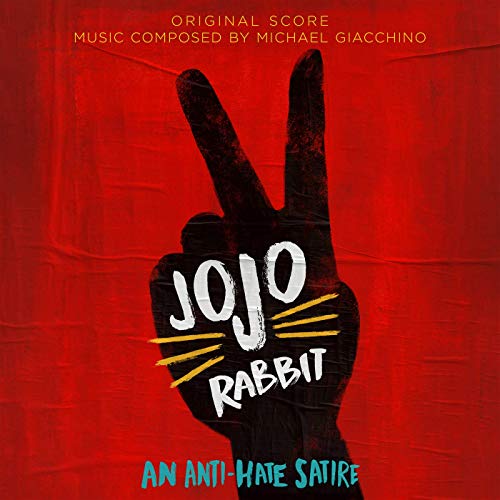 The score of Jojo Rabbit was both a technical and an emotional challenge for composer Michael Giacchino. Firstly, it was important that the main theme, Jojo’s theme, and Rosie’s theme, felt like they could be of the time. Michael created a sense of place, creating themes that sounded like something someone might have had on their record player in the late 30’s. This was accomplished using tuba, acoustic guitar, odd percussion instruments, a string quartet, a piano, a harpsichord. The instrumentation is eclectic, but still feels of that era. But beyond the technical approach to the film, Michael worked to compose a score that would maintain a delicate balance between satire and drama, never wanting to lose sight of the emotional core of the story.

For example, Jojo’s theme starts out as a typical German marching song and slowly shapes into something you are not expecting, something that never forgets a horrific time in history that in no way can be ignored even in the guise of satire. The poignancy of that transition reflects Jojo’s struggle and his desperate effort to be a part of something. As the film unfolds, the music follows a slow emotional journey of someone who starts out one way, and then, through painful experiences and new personal relationships, becomes a completely different person in the end.

In another example, when Hitler is in the kitchen giving a speech to Jojo, his delivery rises both in intensity and absurdity, which could make some viewers want to laugh; however, it was important that Michael’s music not emphasize the satire, but rather, maintain a low tone that would never lose sight of how dangerous this character and his words truly were. Similarly, in the scene when the Gestapo show up at Jojo’s door, they are saying things that are stupid and ludicrous, which was Taika’s way of condemning and mocking them, but the music always needed to remind the audience that they were a true threat. Michael, working with the filmmakers, walked this tightrope carefully with a score is delicate, not overdone, and clearly stays clear of “funny music”.

One of the most challenging cues to write was the scene when Jojo follows the butterfly and comes upon a gruesome scene. Leading up to that moment, Jojo is feeling very happy with himself and his relationship with Elsa. Michael went back and for the with Taika and the editors discussing how to time the scene out. They did three or four versions, never steering far from what the core of the story was, but really thinking about the timing, so that when we get to the most heartbreaking part of the scene it lands where it should, when the heartbreaking moment is revealed. While instinct at that point might lean towards the dramatic, Michael chooses to play it quiet, simple, and inward, which allows us to absorb the tragic reality.

This delicate balance continues throughout the entire film which at its conclusion leaves us with a feeling of hope, with the music being an important partner in getting us there.