This past weekend, Michael was in Dublin for two nights of concerts celebrating his music. The RTÉ National Symphony Orchestra had the honor of being the first to perform new music from the upcoming film Spider-Man: Far From Home, and the suite was live-streamed which you can watch on the official Spider-Man Facebook page.

Michael has recorded new Inside Out pieces that will be featured on the new Disneyland attraction, “Inside Out Emotional Whirlwind”. The ride will open at the Pixar Pier later this summer.

The Cincinnati Pops Orchestra, as part of their celebration of the 50th anniversary of the moon landing, will be releasing a new studio album featuring the original concert work “Voyage”, which Michael wrote and premiered last year at the Kennedy Center. Called “Voyage”, the album will be released on July 5 and feature other space-themed compositions, including music from TV shows as well as music from Michael’s Star Trek (2009) and Rogue One: A Star Wars Story.

Michael will be joining filmmaker Brad Bird at the 2019 View Conference, held in Turin, Italy, this fall. The conference, which focuses on visual effects, animation, gaming, and other forms of visual media, will take place from October 21-25, and Michael will be giving a keynote address, as well as performing a concert of his work. You can register for the conference here.

Michael received a top honor last week at the 2019 ASCAP Screen Msuic Awards, when he was given the coveted Henry Mancini Award. You can read more about the event here, and watch Michael’s acceptance speech below. 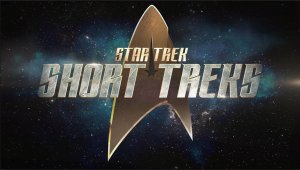 Producer Alex Kurtzman announced that Michael will be directing one of the upcoming Star Trek: Short Treks – and it will be animated.

Last night Michael won the Annie Award for “Outstanding Achievement, Music in an Animated Feature Production” for his score to Incredibles 2.