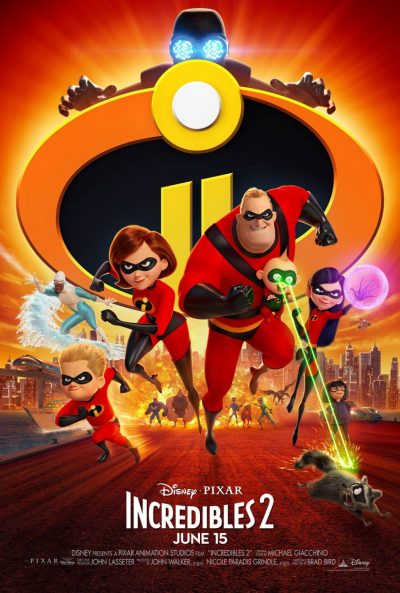 How did you approach the score to “Incredibles 2” as it relates to the first film? How would you describe the score?

Obviously, this score was going to live within the Incredibles universe that was created 14 years ago, but I didn’t go back and listen to everything that I had done earlier, I wanted to take a fresh approach.  Brad and I knew we were going to use the main theme of course, but I still wanted it to have a different vibe while it stayed in the same vein and character.

First of all, I have learned a lot in the last 14 years. Back then I was still figuring out how to make this sound like a Bond film, or that it came out of the 60s, etc. I did that by delving into all the music I loved: Henry Mancini, John Barry, and Hoyt Curtin.  But now I have that arsenal ready and I could just go at it. Listeners will know that they are back in Incredibles world, there is that jazz orchestral thing going, but I had more fun trying to use the brass in different ways, and utilizing the trumpets a lot more this time around, basically I felt more free this time.

Another thing that was really interesting which I think created a terrific sound, was the way that my engineer, Joel Iwataki set up the orchestra. I always record with the full orchestra in the room, but Joel suggested that we set the musicians up in a non traditional way. We had the big band players set up on one side, and strings on the other. He wanted to record it like this so that when he went to mix it, he could get the big band sound we wanted. This gives the soundtrack clarity and of course you still have the energy you get when you record with all the musicians in the same room. The players liked this set up because all the big band guys could hear themselves properly and it created a tighter, more groovy feel.

I was most excited that I got to write a theme for Elastigirl because she plays a much larger role in the movie this time. For the first film, Helen’s music came under the umbrella of the family’s theme. There are several new characters that have new themes, so it was great to have an opportunity to contribute a lot of new material. The other really fun part was writing the TV theme song jingles for each of the characters that will show up in the end credits, but they have been creativity used by marketing as well. It was a perfect chance to work with the great Alex Lacamoire who arranged these songs for me. I don’t often get to write songs, and I really like to, we had a great time doing it.